What is the Great Pyramid? 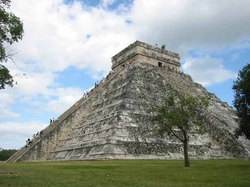 Great Pyramid
The Olmecs were the first civilization to build pyramids. The pyramids that they built resembles volcanoes, and was thought that they practiced a volcano cult. The "Great Pyramid" was the largest Mesoamerican structure of its time.Even today, after 2,500 years of erosion, it rises 34 meters above the naturally flat landscape.

What is "Complex A"? 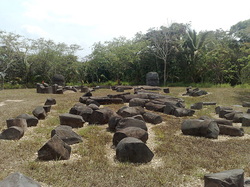 Mounds
Complex A is a mound and a plaza group located north of the great pyramid. The center line of Complex A is originally oriented to the North, which means that the Olmecs had some knowledge about astronomy.  Beneath the mounds and plazas were offerings and other buried objects from the Olmecs including jade, polished mirrors made of iron-ores, and large serpentine blocks from "Mass offerings". Also in Complex A, there are three rectangular mosaics  each roughly 4.5 by 6 meters. The mosaic consist of more than 485 blocks of serpentine,and the blocks were arranged horizontally to form what has been variously interpreted as an Olmec motif, the Olmec Dragon, a very abstract jaguar mask, a cosmogram, or a symbolic map of La Venta.

What is the "Old Temple"?
The construction of the "Old Temple" took place during the 900-500 B.C.E in Chavin de Huantar. The temple is composed primarily of passageways built around a circular courtyard, and contains obelisks, stone monuments with relief carvings depicting jaguars and caiman.


What is the "New Temple"?
The new temple is constructed between 500-200 B.C.E. The temple is also based on a gallery and plaza designs containing many  sculptures. The new temple was created with similar patterns as the old temple, but much larger.The renovations enlarged the site considerably and added a rectangular plaza. The main objective of the renovations is to enable more people to gather in one place, as the site in general expanded.