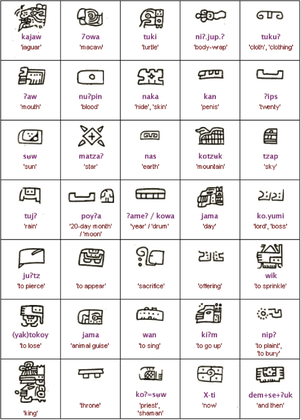 The Olmec Writing is Unique. They may have been the first civilization in the Western Hemisphere to develop a writing system.The Olmecs spoke an aspect of the Manding language spoken in West Africa, and they use both a syllabic and hieroglyphic scripts.There are two forms of Olmec hieroglyphic writing : the pure hieroglyphics
(pictures); and the phonetic hieroglyphics, which are a combination of syllabic and logo graphic signs. The first Olmec writing started out with glyph representing calendrical events, and then later logo graphs(line drawing for single ideas). Olmecs invented printing presses, a roller stamp or cylinder seal, which could be attached and rolled onto human skins, paper, or cloth.They also engraved many pictures and symbols or signs onto potteries and buildings that can be predicted as another kind of writing.

The Chavin never developed a writing system, but there was some writing involved in the civilization. A form of writing was found on stone pillars and many believe that writing was used for rituals to be recorded.