What were the aspects of religion in the Olmec civilization? 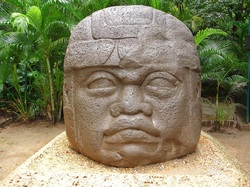 Researchers believe the Olmec people to have centered their religion around five key aspects: specific cosmology,   deities who controlled the natural world, shamans and rulers who were intermediaries between such deities and the common Olmec people, rituals centering around ideas of the cosmos led by this ruling class, and sacred sites. Because they believed their rulers to be relatives of their supernatural gods, they were held at a level of high respect. Giant stone heads were made to look like these kings and rulers as a way of honor and worship. Because of this, religion dictated the politics and much else of Olmec life. Though no buildings that can be specifically identified as places of worship have been discovered, one most commonly accepted as a  religious complex is known as Complex A La Venta. Here, man-made places considered sacred to the Olmec such as ball courts and temples can be found. Religious rituals were practice in such places. Remains of bones serve as evidence that they may have practiced human sacrifices as offerings to their gods, which influenced later civilizations such as the Mayans and Aztecs, to do so as well. With the Olmec being the first Mesoamerican civilization, the aspects of their culture set the scene for the     rest of Mesoamerican societies to come. Religion, being an aspect of culture of which their daily lives were dominated, held strong influence among the Olmec and the consequently with civilization such as the Maya. Their complex religion and ways of sacrifice that later civilizations adopted, were first seen with the Olmec.

The Bird Monster
This god was seen as repitlian-bird like ruler of the skies and sun who was preferred by the ruling class.

The Banded-Eye God
Little is known about the Banded-Eye God aside from it's appearance from which researchers have named it. Of all the gods it is the most human-like and has one eye with a stripe passing through it.

The Maize God
Maize and agriculture were extremely important to the lives of the Olmec. This god was dedicated to the production and growth of the crop and is depicted to have had a stalk of corn growing from his head. With it being so important, the Maize God was often seen to have relations with the rulers of Olmec civilization, indicating the ruler's duty to unsure that the people were well fed with plentiful crops.

The Water God
The Water God usually worked hand in hand with the Maize God, explained by their coexistence to provide for the people of Olmec civilization. Resembling a chubby infant, he dealt with all forms of water in Olmec belief.

The Were-Jaguar
The Were-Jaguar is depicted as a human baby having feline qualities and a cleft in its head. Many descriptions offer the idea that it may have been dead or asleep.

What were the aspects of religion in the Chavin civilization?